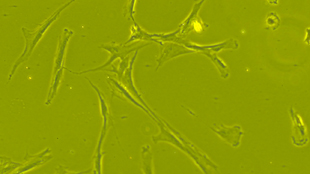 WIKIMEDIA COMMONSSince they were first described in the 1960s, mesenchymal stem cells (MSCs) have been misunderstood. Originally identified as bone marrow cells that can be coaxed to regenerate bone, the name MSC has been applied to a number of tissues, including fat and dental tissue, that showed promise for developing into different cell types to treat ailments ranging from heart and brain injuries to Crohn’s disease and multiple sclerosis. To set the record straight on MSCs, a working group comprised of academic, industry, and governmental experts met for the first time this March at the National Institutes of Health (NIH) campus in Bethesda, Maryland, Nature reported on Tuesday (July 23).

The working group, assembled by the NIH, is tasked with defining exactly what MSCs are and what they can be used for. The group’s first step will be working with academic journals, which have seen a sharp increase...

“People have to be much more rigorous in defining MSCs, their sources, which tissues you can obtain them from, and what you can use them for,” Paolo Bianco, a stem-cell researcher at the Sapienza University of Rome who is not involved in the initiative, told Nature.

The panel is also charged with the more challenging task of developing a reference line of cultured MSCs and guidelines for the commercial development of MSC-based therapies. However some researchers question the theoretical basis for the clinical use of MSCs. “If I want to treat a disease of the brain with cells that, for all intents and purposes, are bone cells,” Bianco told Nature, “the first thing I should come up with is a clear rationale.”

As of now, the impact of creating new standards for MSCs on the biotechnology industry is unclear. So far, “pharma hasn’t invested a lot [in MSCs],” Robert Deans, executive vice-president of Cleveland-based biotech firm Athersys, told Nature. “There’s not enough consensus on these cells.”