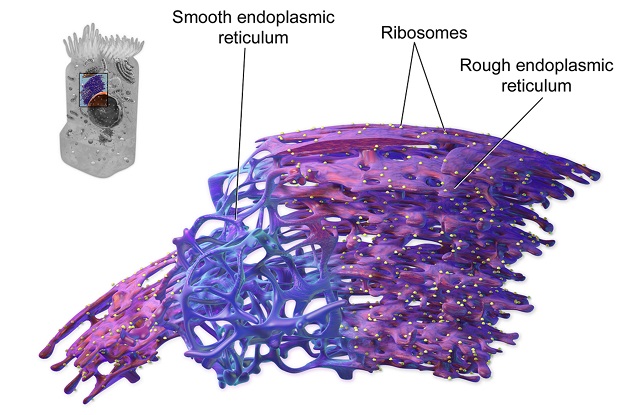 WIKIMEDIA, BLAUSEN GALLERY 2014Super-resolution images of human and monkey cells have revealed the structural details of the endoplasmic reticulum (ER), a membranous organelle that supports protein-producing ribosomes, among other functions, in greater detail than ever before. The study, published today (October 28) in Science, showed that what were once thought to be flat sheets of membranes are actually dynamic clusters of tubules.

“A lot of what we’ve assumed based on the tools that we had really isn’t true,” study coauthor Craig Blackstone, a cell biologist at the National Institute of Neurological Disorders and Stroke, told Science News.

The network of tubules may give the ER flexibility to adapt to changing cellular conditions, the authors suggested in their report. The tubules are cross-linked at three-way junctions, the researchers found, and these junctions can traverse the tubules. In addition, the tubules can expand and contract, possibly allowing the ER...

The ER does also contain some sheets, stacked and concentrated in the part of the organelle by the nucleus, the researchers found. “Improved spatiotemporal resolution of ER structure and dynamics, as shown here, should help to address . . . key issues regarding ER function in healthy cells and during disease pathogenesis,” the authors wrote in their paper.

For now, “the mystery of this ubiquitous changeable organelle endures,” Mark Terasaki at University of Connecticut Health Center wrote in an accompanying perspective article.