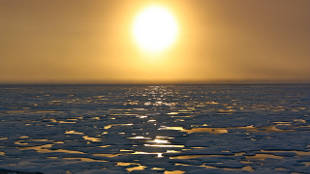 Phytoplankton are changing the “physical property of the ocean,” lead study author Jong-Yeon Park of the Max Planck Institute for Meteorology in Hamburg, Germany, told The Washington Post. “If there is more phytoplankton in the ocean, then more shortwave radiation, radiant heating appears in the upper ocean, and less sunlight can penetrate into the deeper ocean. So, basically, it can change the vertical distribution of ocean heating.”

A positive feedback process is already known to occur in the Arctic, as the darker-hued ocean water absorbs more sun than the lighter-colored ice. So as the climate warms and more ice melts, more heat is trapped,...

“We believe that, given the inseparable connection of the Arctic and global climate, the positive feedback in Arctic warming triggered by phytoplankton and their biological heating is a crucial factor that must be taken into consideration when projecting future climate changes,” coauthor Jong-Seong Kug of Pohang University of Science and Technology in South Korea said in a press release.