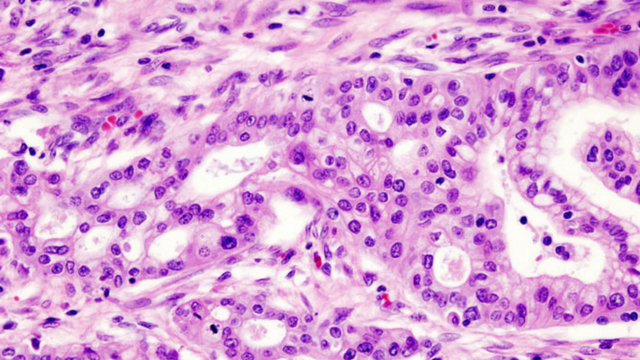 WIKIMEDIA, USER:KGH Scientists have identified a pair of markers—readily detectable in patients’ blood using an enzyme-linked immunosorbent assay (ELISA)—that can accurately identify those with early-stage pancreatic ductal adenocarcinoma (PDAC), according to a report published yesterday in Science (July 12).

The mortality rate for pancreatic cancer is staggeringly high—a 7 percent 5-year survival rate, according to an estimate from the American Cancer Society—and it’s expected to rank second on the list of top causes of cancer death within the next three years, write the authors in their report.

Doctors are typically only able to detect this cancer “after it causes pronounced symptoms, when it has advanced far enough to be lethal,” lead author Kenneth Zaret of the Perelman School of Medicine at the University of Pennsylvania tells UPI.

The researchers sought to find markers that could catch patients with the disease before it progressed into later stages. In a...

One protein, thrombospondin-2, was elevated in patients with PDAC. When combined with the already-identified cancer marker CA19-9, the researchers were even better at detecting these patients and discriminating between cancer stage. For instance, in a sample of 537 people, including PDAC patients, participants with other pancreatic disorders, and healthy individuals, the researchers demonstrated that thrombospondin-2 together with CA19-9 could pick out PDAC patients with 98 percent specificity and 87 percent sensitivity.

“The bottom line is, by looking at two markers and not just the single marker we increased the range of what we could detect in a person with pancreatic cancer,” Zaret tells CBS News.