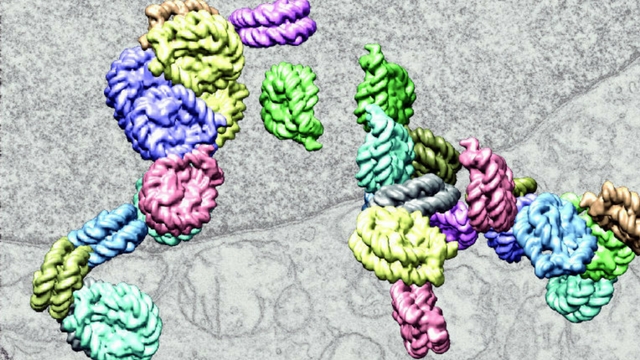 An electron micrograph depicting chromatin chains inside a nucleusCLODAGH C. O'SHEA, SALK INSTITUTE, LA JOLLA, CALIF. When it’s completely unraveled, DNA is known to extend approximately six feet in length, yet is somehow able to cram itself into a cell’s nucleus. In a study published today (July 27) in Science, researchers created a novel visualization method that revealed a 3-D glimpse of chromatin as it sits jam-packed within the nuclei of human cells.

The researchers found that, contrary to how it’s depicted in most textbooks, chromatin does not fold in on itself in an organized manner to create distinct structures. Instead, it forms a pliable, inconsistent chain characterized by a wide variety of folding patterns.

“We show that chromatin does not need to form discrete higher-order structures to fit in the nucleus,” explains O’Shea in a news release by the Salk.

A team of scientists at the Salk Institute applied a new dye that covers the surface of DNA, and together with University of California, San Diego, researchers, used electron-microscope tomography to visualize its 3-D structure, dubbing their method ChromEMT.

“The system enables individual DNA particles, chains and chromosomes to be visualized in 3D in a live, single cell. Thus, we are able to see the fine structure and interactions of DNA and chromatin in the nucleus of intact, live cells,” senior author Clodagh O'Shea of the Salk Institute says in a news release by the National Institutes of Health (NIH), which funded the study.

This new picture of chromatin structure demonstrates that in order to contain itself within a given cell’s nucleus, DNA folds a bit differently than what researchers originally envisioned. The authors conclude that chromatin is both “a flexible and disordered 5- to 24-nm-diameter granular chain that is packed together at different concentration densities.” It bends and folds together in different places, achieving a diversity of structures.