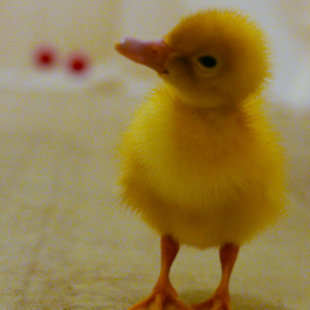 ANTONE MARTINHOA duckling enters the world primed to recognize its mother. Only she need not look like a duck, nor even necessarily a living animal. In a study published last week (July 14) in Science, researchers used this ability of ducklings to discover that they can recognize abstract traits—color and shape—as properties of their “mother.”

Researchers from University of Oxford, U.K., presented ducklings with a “mother” composed of two blocks, shaped as a combination of two cubes, prisms, or spheres. A bird might be given two green spheres to imprint on, for example. The researchers then took the blocks away. Finally, the scientists showed the duckling two new pairs of blocks, slowly circling a track, like two very short toy trains. For example, these might be a pair of matched blue spheres and a mismatched pair of orange and purple spheres. (See Science’s video.)

Birds have often been pigeon-holed as dimwitted, noted Edward Wasserman of the University of Iowa, who penned an accompanying commentary.

“In fact, birds are extremely intelligent and our problem pretty much lies in figuring out how to get them to ‘talk’ to us, or tell us how smart they really are,” Wasserman told The New York Times.