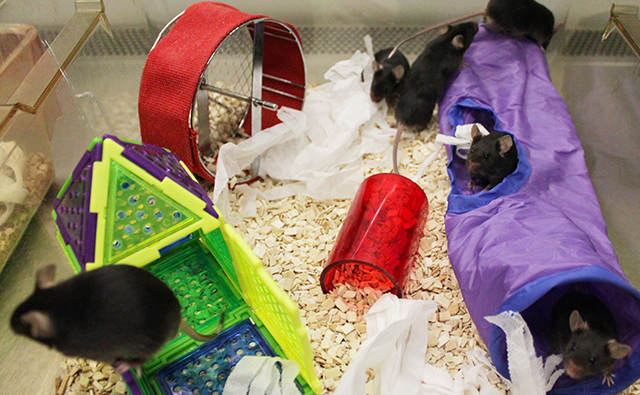 QUEEN MARY UNIVERSITY OF LONDONLiving in an enriched environment—with a running wheel and other toys—might alter mouse T-cell function, according to a study published in Frontiers in Immunology last week (September 30). T cells extracted from mice housed in the more-stimulating habitats for two weeks expressed higher levels of 56 genes, including several involved in immunity. Moreover, compared with cells from mice housed in a standard environment, the cells produced a more proinflammatory cocktail of cytokines, researchers from Queen Mary University of London (QMUL) and their colleagues reported.

“Together, our results provide first evidence for a specific effect of [environmental enrichment] on T cell differentiation and its associated changes in gene expression profile,” the authors wrote in their paper.

Fulvio D’Acquisto of QMUL and colleagues housed mice in standard cages with sawdust and nesting material or enriched environments: larger enclosures that included wood shavings and a variety...

“After only two weeks in an enriched environment with plenty of toys and space, the mice’s immune systems were completely different and seemed to be better prepared for fighting infections,” D’Acquisto said in a press release.