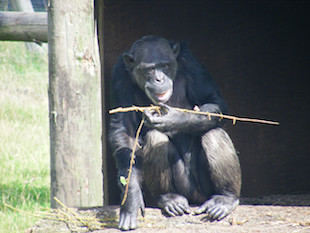 FLICKR, MARIE HALEScientists compared the metabolic rates of people with those of chimpanzees, bonobos, gorillas, and orangutans, finding that humans burned between 400 and 820 more calories per day than their great ape counterparts. Humans’ faster metabolism may have helped fuel the growth of larger brains, enabled more frequent reproduction, and increased lifespan, Herman Pontzer of Hunter College in New York City and his colleagues reported yesterday (May 4) in Nature.

“The brilliant thing here is showing for the first time that we do have a higher metabolic rate, and we do use more energy,” Leslie Aiello, president of the Wenner-Gren Foundation for Anthropological Research in New York City, who was not involved in the work, told Science. “Herman and his colleagues have effectively integrated all of the earlier ideas into a unified theory for energy and the evolution of human characteristics.”

Humans also have more body fat than the other species studied. Men have 22.9 percent body fat and women have 41.1 percent, compared with 8.4 percent and 9 percent for male and female chimps, respectively.

The extra fat may have offset the costs of humans’ rapid metabolism during lean times, the researchers said. “It’s the reserve fuel tank for our gas guzzling bodies,” Pontzer told The Washington Post.