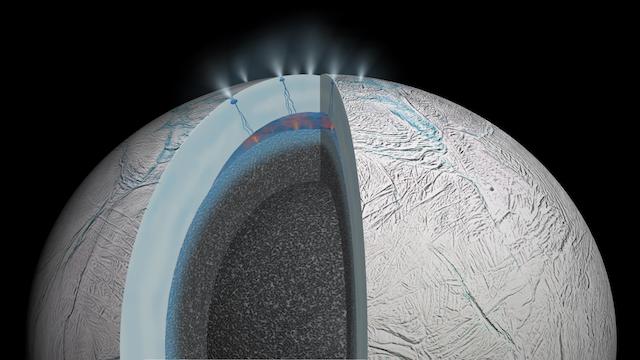 Vaporous plumes erupt from between the cracks on the icy exterior of the subsurface ocean on Enceladus, one of Saturn’s many moons. These geysers contain molecular hydrogen, a potential source of energy for microbial life, researchers reported last week (April 14) in Science.

With NASA’s Cassini spacecraft, scientists have been exploring Saturn for more than a decade, and a key question during these missions has been whether the moon contained molecular hydrogen, an energy source for microbes. In October 2015, during the latest flyby through the plumes, scientists sampled and measured the jet’s chemical constituents, finding that 0.4 percent to 1.4 percent contained molecular hydrogen (H2).

“Combined with our knowledge that there’s an ocean under Enceladus, that it’s salty, that it contains organics and mineral interactions . . . it really completes the case for...

“The level of H2 is way above the limit for life,” Chris McKay, an astrogeophysicist at NASA’s Ames Research Center who was not involved in the study, told Science News. McKay added that the study “confirms that the ocean of Enceladus would be a nice place for life.”

Although Lunine and colleagues have not shown that life exists on one of Saturn’s moons, the researchers say it’s enough to warrant another mission to Enceladus. “We’re pretty darn sure that the internal ocean of Enceladus is habitable and we need to go back and investigate it further,” study coauthor Hunter Waite, a Cassini scientist at the Southwest Research Institute in San Antonio, Texas, told BBC News.