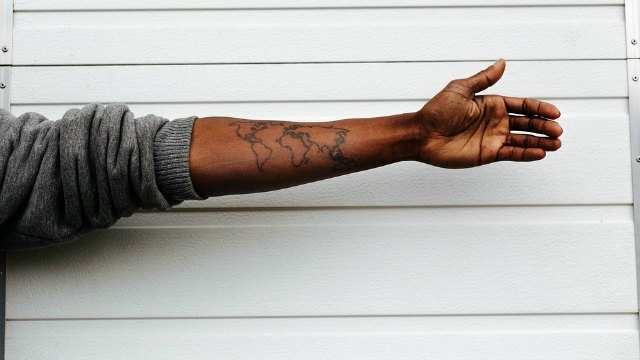 Despite the emphasis that humans have placed on skin color throughout history, little is known about its genetic basis. As The New York Times reports, most of what scientists knew of skin-color genetics came from studies of European populations, which found that mutations in the gene SLC24A5 caused cells to make less pigment, resulting in paler skin. Most Europeans have the same variant for that gene.

That “gives you a very incomplete perspective,” University of Pennsylvania geneticist Sarah Tishkoff, who led the new work, tells The Atlantic.

To learn more about the genetics of skin color, Tishkoff and her collaborators went to Africa, where skin color varies widely. “Africa is not some homogenous [sic] place where everyone has dark skin,” Tishkoff tells The Atlantic....

The researchers measured light reflectance from the skin, a proxy for pigment levels, in 2,092 people in Ethiopia, Tanzania, and Botswana. They then genotyped 1,570 of those individuals for more than 4 million single nucleotide polymorphisms (SNPs) across the genome.

Tishkoff’s group identified four genomic regions where genetic variation was associated with skin color. Sequence differences at these loci account for about 29 percent of the observed variation in pigmentation, according to the study. Within those regions, the researchers focused on six genes tied to pigmentation: SLC24A5, MFSD12, DDB1, TMEM138, OCA2, and HERC2.

For instance, study participants with the darkest skin were more likely to have variations in MFSD12 that lead to reduced gene expression. According to Science’s news report, “These variants arose about a half-million years ago, suggesting that human ancestors before that time may have had moderately dark skin, rather than the deep black hue created today by these mutations.”

According to what The Atlantic calls the “traditonal evolutionary story of human skin,” early humans in Africa had dark skin to protect themselves from ultraviolet radiation, and that when they migrated away from the Equator to less sunny regions, they evolved lighter skin to continue to produce vitamin D despite the lack of sun. But Tishkoff’s team identified variants leading to light skin and variants causing dark skin, both of which they think originated in African populations. Sometimes, the older variant led to lighter skin, countering the idea that the original Africans were all dark-skinned.

In the case of SLC24A5, Tishkoff’s study found that the gene variant associated with light skin is commonly present in East Africans. Yet, having this variant does not necessitate having light skin, likely because multiple genes interact to determine skin color, Tishkoff tells Science. Another twist to this gene’s story is that this gene variant likely came to Africa from the Middle East, Tishkoff tells Science.

An alternative hypothesis to the evolution of skin tone is that people may have independently evolved dark skin in different parts of the world depending on the sunlight they received. But according to the study, “the dark-skinned people of southern India, Australia and New Guinea, for example, did not independently evolve their color simply because evolution favored it. They inherited the ancestral dark variants Dr. Tishkoff’s team found in Africans,” the Times reports.

The study furnishes “a deeper appreciation of the genetic palette that has been mixed and matched through evolution,” University of Pennsylvania anthropologist and skin-color expert Nina Jablonski tells the Times.