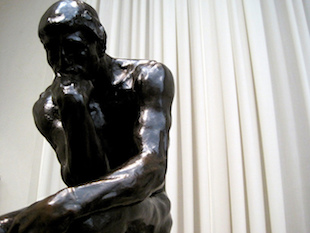 "The Thinker"FLICKR, GABY AVThe same genes could make a person feel happy or depressed, depending on their environment. Combining research on genetics and cognitive biases—our mental “filters” for interpreting the world—will contribute to a greater understanding of mental disorders and could lead to improved therapies, Elaine Fox of University of Oxford and Chris Beevers of the University of Texas at Austin suggest in a perspective published yesterday (July 19) in Molecular Psychiatry.

“We suggest that while no gene ‘causes’ mental ill health, some genes can make people more sensitive to the effects of their environment—for better and for worse,” Fox said in a statement.

Fox and Beevers reviewed studies on both mental health genetics and cognitive biases, attempting to explain how the two work in concert to influence mental health.

Likewise, genetics studies have identified variants, such as the serotonin transporter-linked polymorphic region (5-HTTLPR) short (S) allele, which make people more sensitive to their environments. People with this S allele are more likely than people with the long (L) variant to develop psychiatric disorders after experiencing adversity in childhood, studies have shown.