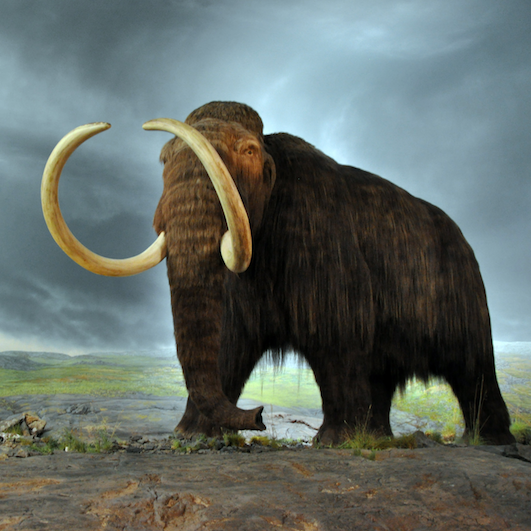 WIKIMEDIA, MAMMUTWoolly mammoths went extinct in North America and mainland Asia about 10,000 years ago. But a few survived on St. Paul Island, a remnant of the Bering Land Bridge, for millennia longer. Until now, the cause of their ultimate demise has remained a mystery. According to a study published this week (August 1) in PNAS, the last remaining survivors of the species appeared to run out of freshwater around 5,600 years ago.

A team of researchers in Canada and the U.S. dug sediment cores from an ancient lake on the island, recovering—among other things—ancient mammoth DNA. Aside from frequenting lakes for hydration, mammoths would have romped and defecated in the lakes, researchers surmise. By connecting the age of the sediment by radiocarbon dating to the presence of DNA and fungi (brought in via feces), the team could gauge when the mammoths disappeared from the island as well...

All signs pointed to a lack of water. Pollen indicated vegetation was abundant, so the mammoths didn’t go hungry, The Atlantic reported. Rather, Science News  and The Guardian noted, an increase in salt-tolerant algae and crustaceans and the ratio of oxygen isotopes—which serve to indicate the evaporation rate—suggested the lake became smaller, saltier, and more turbid, the researchers found. As the climate warmed, the lakes of the island would have dried faster. As sea level rose, ocean water would have creeped inward, The Atlantic reported. The animals likely crowded around the remaining water holes, causing erosion that hastened the unsustainable lack of freshwater, the authors wrote in their paper.

“I don’t think I’ve ever seen something so conclusive about an extinction before,” Love Dalén, an evolutionary geneticist at the Swedish Museum of Natural History in Stockholm who was not involved in study, told Science News. The results demonstrate “how sensitive small populations are and how easily they can become extinct,” Dalén added.