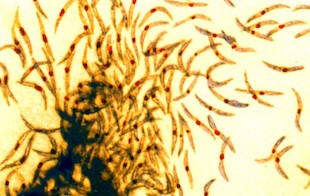 Malaria sporozoitesFLICKR, NIAIDThe malaria vaccine doesn’t provide lasting protection against the mosquito-borne disease, according to a study published yesterday (June 29) in NEJM: it delays infections by several years instead. This seven-year follow-up on a Phase II clinical trial of the RTS,S vaccine in African children found the immunization to be only marginally effective, causing a “rebound effect” in which vaccinated children became infected with malaria several years later, the authors reported.

“Is delaying the age at which most of the malaria occurs going to be good or bad or indifferent?” study coauthor Philip Bejon of the KEMRI-Wellcome Trust Research Program in Kilifi, Kenya, told STAT News. “We don’t really know.”

Bejon and colleagues conducted a double-blind, randomized controlled trial of the vaccine, made by GlaxoSmithKline, in 447 children who were between 5 months and 17 months of age at the time of the first vaccination....

Four years after immunization, the malaria vaccine provided almost no protection against contracting the disease. In fact, five years later, the children who had received the vaccine were more likely to contract malaria, the researchers reported.

However, the study was fairly small, and not all the children returned for the follow-up. “I think all we can say is that there isn’t a clear benefit overall by the time you get to the end of seven years,” Bejon told Vice’s Motherboard.

The team did find that children who received a fourth dose of the vaccine were better protected against malaria infection than were those who only received three doses. The researchers plan to investigate whether an additional dose provides longer protection, they noted in their study.