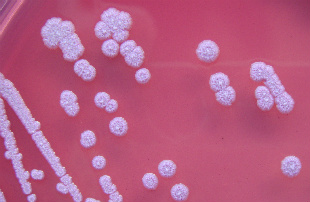 Burkholderia pseudomallei growing on agarWIKIMEDIA, GAVIN KOHThe bacterium that causes melioidosis—an obscure but deadly infectious disease—may be present in as many 79 countries around the world and could be responsible for nearly 90,000 deaths each year, according to a study published yesterday (January 11) in Nature Microbiology.

Burkholderia pseudomallei was previously thought to be confined mainly to Southeast Asia and Australia, where the disease has reported fatality rates of between 20 percent and 50 percent. But using the locations of over 22,000 reported human and animal cases to construct a statistical model, researchers from the University of Oxford predicted that melioidosis is underreported in 45 countries where it is known to be present, and endemic in a further 34 where it has never been reported.

“Although melioidosis has been recognized for more than 100 years, awareness of it is still low, even among medical and laboratory staff...

The bacterium—which is resistant to a wide range of antimicrobials and for which there is no vaccine—may be ingested in contaminated water, inhaled during extreme weather, or inoculated via cuts to the skin. Infection presents a particular risk for people suffering from diabetes or chronic kidney disease.

Although B. pseudomallei are considered absent in the U.S., the team’s analysis showed that they would likely be able to establish in several warmer, southern states if introduced—a risk increased by “the movements of people and animals,” said Limmathurotsakul.

The University of Texas’s Alfredo Torres, who was not involved in the work, told Science that the findings should convince health officials to “pay more attention” to melioidosis. “I really hope this paper will open the eyes of some people involved in health policy,” he said.