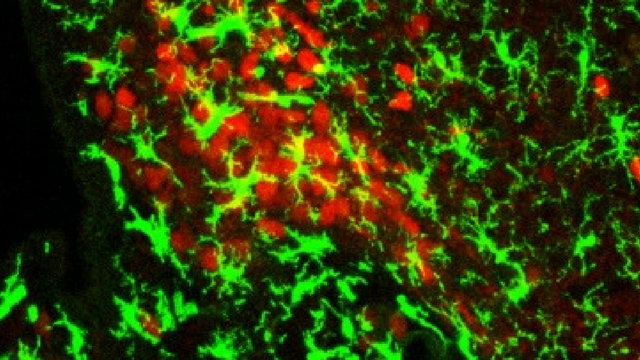 A slice of the mediobasal hypothalamus, taken from a mouse fed a high-fat diet, depicts accumulating microglia (green) along with Agouti-related protein neurons (AgRP; red). AgRP neurons are important regulators of food consumption and body composition.

Microglia—the brain’s own macrophages—can prompt excess eating and subsequent weight gain in mice fed high-fat diets, according to a study published today (July 5) in Cell Metabolism. The researchers demonstrate that an appetite-promoting inflammatory cascade driven by these immune cells occurs within the mediobasal region of the hypothalamus, a structure that, according to a news release, “contains key groups of neurons that regulate food intake and energy expenditure.”

Prior studies have demonstrated that when mice are fed a diet high in saturated fat, they consume more while expending fewer calories, leading them to gain weight, the news release states. Additionally, previous work in both obese mice and...

In the current study, the researchers examined whether microglial activity in the mediobasal hypothalamus had anything to do with the increased food consumption and weight gain observed in mice consuming diets high in fat.

Ongoing clinical trials testing the effects of a similar drug called PLX3977 in patients with certain cancers and arthritis may be able to shed some light on whether pharmacologically targeting microglia can impact weight, notes senior author Suneil Koliwad of the University of California, San Francisco, in the news release.

To find out if microglial activity alone could trigger overeating and weight gain in mice on a normal low-fat diet, the scientists induced microglial inflammation in the rodents’ brains. Indeed, despite eating diets lower in fat, hypothalamic inflammation drove these mice to burn fewer calories, eat more, and gain more weight than control mice on normal diets.

“From these experiments we can confidently say that the inflammatory activation of microglia is not only necessary for high-fat diets to induce obesity, but also sufficient on its own to drive the hypothalamus to alter its regulation of energy balance, leading to excess weight gain,” says co-senior author Joshua Thaler of the University of Washington, in the news release.

When high-fat foods were scarce, microglia could have evolved to amplify appetite to increase consumption of energy-rich meals, adds Koliwad. But this adaptation may no longer be advantageous. “In our modern world, when people constantly overeat rich, high-fat foods, chronic microglial activation could produce a more permanent stimulation of neural circuits that further increase high-fat food intake, leading to the development of a vicious cycle.”