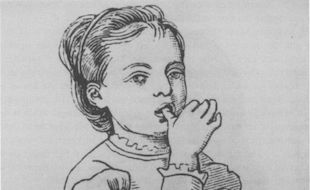 WIKIMEDIAAs kids, we’re often told not to suck our thumbs or bite our nails, but there may be an unappreciated benefit to these “dirty” habits: fewer allergies, scientists suggest. Through a longitudinal study that followed 1,037 children born in Dunedin, New Zealand, between 1972 and 1973 to adulthood, researchers from the University of Otago, New Zealand, and their colleagues found that kids who engaged in one of these habits had a 39 percent risk of testing positive to at least one common allergen at age 13, compared with 49 percent of kids who did not bite their nails or suck their thumbs. Kids who were both nail-biters and thumb-suckers had only a 31 percent risk, the researchers reported online today (July 11) in Pediatrics.

“The findings support the ‘hygiene hypothesis,’ which suggests that being exposed to microbes as a child reduces your risk of developing allergies,” study coauthor...

Parents of the study participants reported whether their children engaged in thumb-sucking or nail-biting when their kids were 5, 7, 9, and 11 years old. At ages 13 and 32, the participants underwent atopic sensitization (skin prick) tests. The lower rates of sensitization among thumb-suckers and nail-biters at age 13 persisted into adulthood, even after adjusting for factors such as family history, sex, pet ownership, and breastfeeding. The researchers found no difference among the participants in their risk of developing asthma or hay fever, however.

“We certainly don’t recommend encouraging nail-biting or thumb-sucking,” Hancox told LiveScience, “but perhaps if a child has one of these habits and [it] is difficult [for them] to stop, there is some consolation in the knowledge that it might reduce their risk of allergies.”

Meanwhile, a set of articles published this month in Perspectives in Public Health takes issue with the idea that modern ideals of cleanliness are harming our health, arguing that this view hinders efforts to combat the rise in allergies and chronic inflammatory diseases.