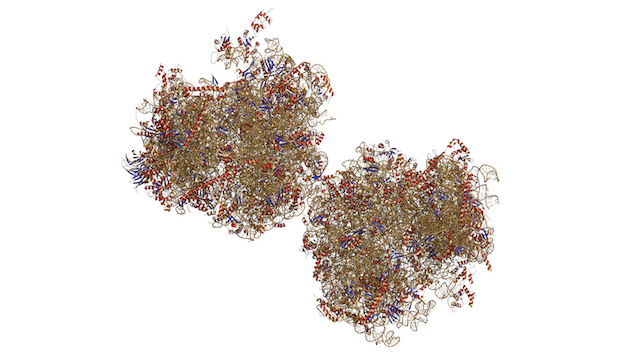 Eukaryotic ribosomeISTOCK, MOLEKUUL Ribosomes, the cell’s protein-building machines that were thought to be indistinguishable from one another, have specialized functions, according to a pair of studies—one published earlier this month (June 1) in Cell and another published last week (June 15) in Molecular Cell.

“Until now, each of the 1 [million] to 10 million ribosomes within a cell has been thought to be identical and interchangeable,” study coauthor Maria Barna, a developmental biology and genetics professor at Stanford University, said in a statement. “Now we’re uncovering a new layer of control to gene expression that will have broad implications for basic science and human disease.”

In the first study, Barna and colleagues reported their findings that ribosomes accumulate different types of proteins around their outer shells, and that these proteins are associated with each ribosome’s function. In their latest study, the researchers discovered that ribosomes preferentially translated...

“This is really an important step in redefining how we think about this central player in molecular biology,” Jonathan Dinman, a molecular biologist at the University of Maryland in College Park who was not involved in either study, tells Science.

This discovery could help researchers better understand ribosomopathies, disorders that are associated with ribosomal mutations. “In Diamond-Blackfan anemia, for instance, the bone marrow that generates new blood cells is faulty, but patients also often have birth defects such as a small head and misshapen or missing thumbs,” Science reports. “These seemingly unconnected abnormalities might have a single cause, the researchers suggest, if the cells that spawn these different parts of the body during embryonic development carry the same specialized ribosomes.”