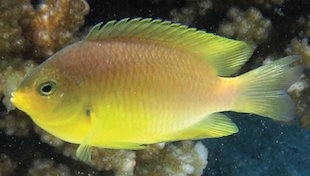 Pomacentrus amboinensisPLOS ONEResearchers from James Cook University in Australia and their colleagues have found that the presence of large predatory fish reduced stress levels in baby prey fish by more than a third, by scaring off midsize predators (mesopredators). The team’s findings, published yesterday (April 27) in the Journal of Animal Ecology, reveal how ecological pressure on large marine predators can have an adverse impact on smaller prey species.

“Previous studies have proven that the sight of large predators can reduce the activity of mesopredators,” study coauthor Maria del Mar Palacios of James Cook said in a statement. “But our study is the first to show that such behavioral control on mesopredators is strong enough to indirectly allow baby fish to reduce stress levels by more than 35 percent.”

Palacios and her colleagues measured the respiration rate—a proxy for stress—of baby damselfish (Pomacentrus amboinensis) when these...

“We are losing top predators at a super-fast rate,” del Mar Palacios told the Brisbane Times. “Those baby fish that remain might not die but they will be super stressed and that will [affect] the population.”