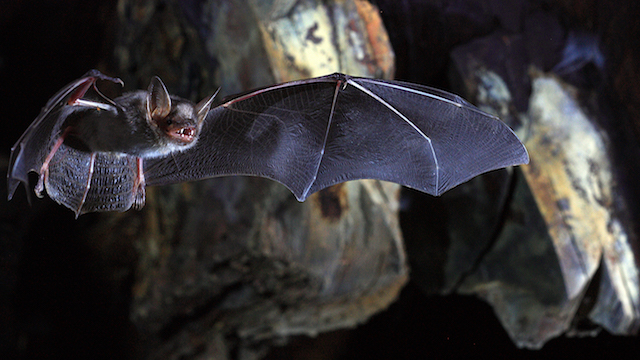 The longest-lived bats—those belonging to the Myotis genus—may have their telomeres to thank for their slow aging process, according to a study published yesterday (Feb 7) in Science Advances.

“In the longest-lived species of bats telomeres don’t shorten with age,” study coauthor Emma Teeling, a professor of biology and environmental science at University College Dublin, tells The Irish Times. “Whereas in other bats species, humans and other animals they do, causing the age-related breakdown of cells that over the course of a lifetime can drive tissue deterioration and ultimately death.”

Teeling and her colleagues conducted wing biopsies on close to 500 bats of four different species at field sites across Europe. Tissue analysis revealed that while the telomeres shortened with age in two bat species, Rhinolophus ferrumequinum and Miniopterus schreibersii, no such change occurred in species belonging to Myotis,...

“[Myotis bats] don’t appear to experience age-related mortality,” Teeling tells Motherboard. “They die of things like starvation, or having an accident, or not having enough water.”

The team also discovered that, surprisingly, Myotis bats—like humans—did not produce telomerase, the enzyme that plays a crucial role in telomere synthesis. “These bats are somehow maintaining their telomeres without it,” Teeling tells Motherboard.

When they analyzed the bats’ genomes, Teeling and her colleagues found 21 telomere maintenance–related genes, including ATM and SETX, two genes involved in repairing and preventing DNA damage.