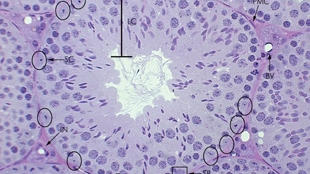 Mouse epididymisWIKIMEDIA, ZHOU, Q. AND GRISWOLD, M.D.Zika virus (ZIKV) can persist in mouse testes long after the infection is cleared from the blood, and cause atrophy of testicular tissues with potential effects on fertility, according to a study published yesterday (February 22) in Science Advances.

“This study shows how the Zika virus replicates in and damages testes,” Yale University biologist and coauthor Ryuta Uraki said in a statement.

“Our findings have important implications for nonvector-borne vertical transmission, as well as long-term potential reproductive deficiencies, in ZIKV-infected males,” Uraki and colleagues wrote in the paper.

The findings echo previous results that also found testicular damage in mice infected with ZIKV, and offers a possible mechanistic explanation for why ZIKV seems to be sexually transmissible.

Although the findings have yet to be replicated in humans, a US Centers for Disease Control and Prevention (CDC) team is conducting a similar study in Zika-infected men in Puerto Rico. “It’s going to be important for us to follow them up for several months to rule in or rule out any effects of Zika infection,” Tyler Sharp, chief epidemiologist at the CDC’s Dengue Branch in San Juan, Puerto Rico, told WebMD.