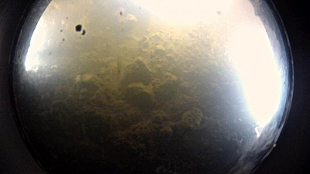 First view of the bottom of Antarctic subglacial Lake WhillansWIKIMEDIA, NASA/JPL-CALTECHIn January 2013, a team of US-based researchers announced that it had successfully extracted liquid water from the Lake Whillans, which lies 800 meters (2,624 feet) beneath the Western Antarctic Ice Sheet. A week later, preliminary reports told of microbial life that was alive and metabolizing energy. Now, publishing in Nature, the researchers present confirmation that such life not only exists in the subglacial lake, but is highly abundant.

“The number of microorganisms we saw in the water was very comparable with what you’d find in a typical surface lake or in the ocean,” microbiologist and lead author Brent Christner of Louisiana State University in Baton Rouge told ScienceNews. “We were very surprised.”

A Russian team is working on a similar project at Antarctica’s subglacial Lake Vostok, but some have questioned whether the evidence of life...

Because little light reaches the depths of these subglacial lakes, the ecosystems that exist in these environments must derive energy from another source. “To have an ecosystem, it has to be fuelled,” Christner told the BBC. He and his colleagues suggest that inorganic compounds—such as ammonium, nitrate, and sulfides—may serve this function. “The action of the ice sheet pulverizes the rock bed, and the mineral particles then go into the water where they become available for chemical and biological alteration,” Christner said.

Whether larger organisms also exist in these subglacial environments remains to be seen. “If we found nematodes or tardigrades, that would be huge, amazing,” Christner told the BBC. “We have no evidence that they're down there, and perhaps Whillans is just too extreme for them. It’s OK for microorganisms but the energy flows may simply not be there for these higher life forms.”