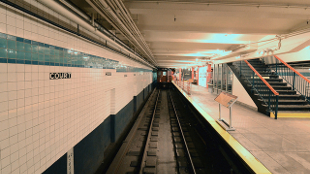 FLICKR, MTAGeneticist Christopher Mason of Weill Cornell Medical College and his colleagues have published their report on the New York City-wide project they call PathoMap, aimed at mapping the microscopic life among the city’s subway system, which shuttles some 5.5 million people around every weekday. (See “Metropolome,” The Scientist, December 2013.) While many DNA fragments represented diverse species that could be matched to genomic database entries, almost half of the genetic samples did not match any known organism, according to the report published in Cell Systems last week (February 5).

“People don’t look at a subway pole and think, ‘It’s teeming with life,’” Mason told The New York Times. “After this study, they may. But I want them to think of it the same way you’d look at a rain forest, and be almost in awe and wonder, effectively, that there are all these species...

Starting in the summer of 2012, Mason and his team collected more than 1,400 samples from the turnstiles, ticket kiosks, seats, doors, poles, railings, and benches at nearly 500 sites, predominately the city’s subway stations. From some 10 billion snippets of DNA, the researchers found evidence of more than 15,000 different species, about half bacterial. Of those, most were of the harmless variety, but some swabs did contain the causative agents of bubonic plague, meningitis, and gastrointestinal distress, and several samples contained bacteria that were antibiotic-resistant.

In addition to demonstrating the microbial diversity of the city’s transit system, the data could provide a baseline of the city’s bacterial composition, to help researchers and public health officials better recognize an impending disease outbreak. “We know next to nothing about the ecology of urban environments,” evolutionary biologist Jonathan Eisen at the University of California, Davis, told The Wall Street Journal. “How will we know if there is something abnormal if we don’t know what normal is?”