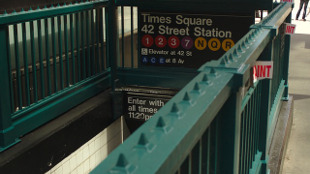 In the wake of media reports suggesting the New York City subways are littered with anthrax and the bacteria that cause bubonic plague, a letter published in Cell Systems last week (July 29) by the authors of a February study that cataloged the microbiome of the subway system made it clear that this is not the case.

“There is no strong evidence to suggest these organisms are in fact present, and no evidence of pathogenicity,” the authors wrote in their correspondence.

The letter, along with edits made to the original study, was in response to another letter, penned by officials at the US Centers for Disease Control and Prevention and the New York City Department of Health and Mental Hygiene, who challenged the authors’ interpretation of metagenomics data from microbial specimens collected at subway stations throughout the city.

“Even though all of the most widely used tools for DNA mapping and metagenomics reported the presence of putative pathogens . . . we felt it was important to unequivocally state the difference between matching fragments of DNA from a species and a pathogen,” study coauthor Christopher Mason, a computational biologist at Weill Cornell Medical College, said in a statement (via Retraction Watch). “Also I would note that there is not a retraction of our paper and there won’t be—our main results have been validated by several groups already and publicized.”