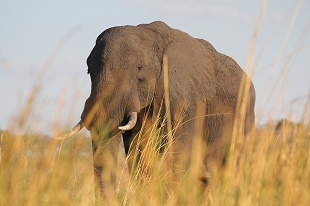 FLICKR, ROSS HUGGETTAfrican elephants have the largest number of olfactory receptor genes known in mammals, nearly twice as many as dogs have, and five times more than humans. The large mammals’ extensive repertoire of receptors spans almost 2,000 genes, according to a study published yesterday (July 22) in Genome Research.

Yoshihito Niimura of the University of Tokyo and his colleagues compared the genome sequences of 13 mammals, which together encompass more than 10,000 genes for olfactory receptors. They found that each species had a unique ensemble of receptors—only three smell receptors were shared and evolutionarily conserved across all the mammals studied. Some gene lineages were completely lost in certain species, while others expanded and diversified. One gene, found only in a single copy in humans and other primates, was found to have formed 84 distinct genes in elephants.

But whether these receptors are behind the elephant’s superior...

Previous studies have found that elephants in the field sniff urine in soil to keep track of—and distinguish among—family members, according to National Geographic. They are also known to tell human tribes apart by smell. The whiff of Maasai men who hunt elephants cued aggressive responses, but African elephants showed no response to the Kamba, an agricultural group that pose little threat.

“This is a fascinating study that confirms what we have observed in the field,” Joyce Poole, cofounder of conservation group ElephantVoices, told National Geographic via e-mail. “If the wind is blowing in the correct direction, elephants can pick up the scent of humans . . . from over a kilometer [0.6 mile] away.”

Poole added: “Want to know what is going through the mind of an elephant? I have always said: Watch the tip of its trunk.”