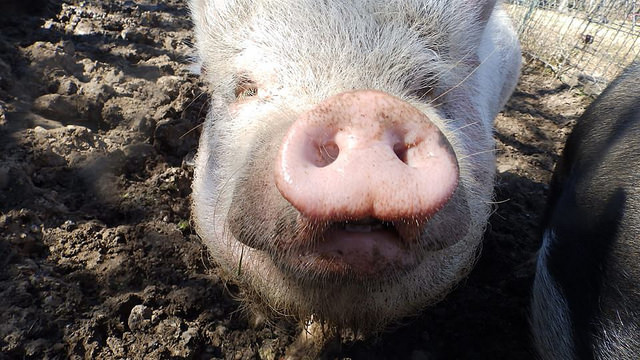 Modern agriculture relies on antibiotics to shield livestock from disease, but widespread over-use of antibiotics has raised concerns over creating highly resistant “superbugs.” Researchers announced this week (December 5) that bacteria carrying a rare, dangerous gene for antibiotic resistance have been found in agricultural animals for the first time.

In a study published in Antimicrobial Agents and Chemotherapy, researchers took swabs and fecal samples from a pig farm and discovered bacteria resistant to carbapenems, an important class of antibiotics. However, the resistant bacteria were found in only a few samples and were not detected in pigs that were being fattened for slaughter.

“There is no evidence the pigs carried the gene into the [human] food supply,” Thomas Wittum of Ohio State University, a coauthor on the study, said in a press release.

Carbapenems are regarded as a “last resort” against highly resistant pathogens in hospital settings,...

Carbapenem-resistant Enterobacteriaceae (CRE) are a particularly serious concern in hospitals and nursing homes, where they cause more than 9,000 infections and 600 deaths annually according to a 2013 report by the US Centers for Disease Control and Prevention. Fortunately, while the authors identified bacterial resistance to carbapenems on the farm, they did not isolate any actual CRE from their samples.

Nonetheless, CRE “present an urgent threat to public health,” the authors write. “The implication of our finding is that there is a real risk that CRE may disseminate in food animal populations and eventually contaminate fresh retail meat products.”