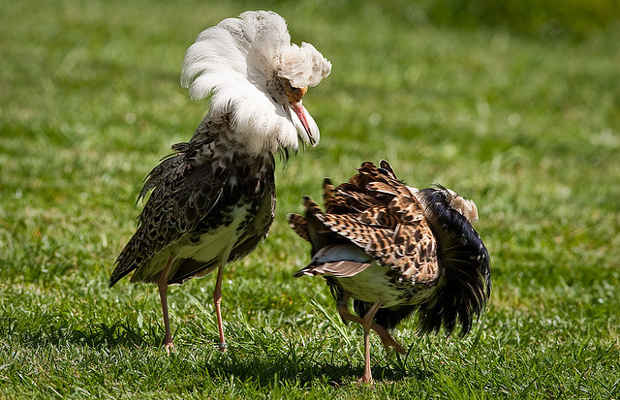 FLICKR, ARJAN HAVERKAMPMale ruffs (Philomachus pugnux) employ one of three different strategies to mate: defend a territory when they aim to monopolize females, sneak into the territories of the dominant males to steal copulations, or resemble females to evade detection by the dominant males and jump in mid-coitus. Which of these alternative reproductive tactics a male follows is determined by 125 contiguous genes that compose a single supergene stretching some 4.5 million base pairs in length, according to two studies published in Nature Genetics this week (November 16).

Interestingly, the genetic differences between the three male morphs—which vary in their appearance as well as their behavior—is dramatic and quite old. “The sequence difference is larger than the average sequence difference between humans and chimps, so we estimate it occurred at least 4 million years ago,” Leif Andersson, an evolutionary geneticist at Uppsala University in Sweden who coauthored...

It’s a bit unusual for such a long stretch of DNA to stay together for such a long time, without being broken up by recombination. The sequence data suggest that the supergene originally arose following an inversion event that prevented reshuffling with a sister chromosome. “It’s rather like the emergence of a new sex chromosome,” Terry Burke, an evolutionary biologist at University of Sheffield, U.K., who coauthored the second study, told New Scientist.

Just 500,000 years ago, part of the supergene inverted again, creating a second version. Males that are homozygous for the ancestral, pre-inversion DNA become dominant territory holders, while males that carry one copy of the original inverted supergene become female mimics, and those with a copy of the new re-inverted version become satellite, or sneaker, males. (Having two copies of either modified super gene is fatal.) Changes that have accrued in the three variants over the last 4 million years likely account for the physical and behavioral differences between the morphs.

“It’s [a] nice example of how evolution can throw up spectacular things on very rare occasions,” Burke told Nature.