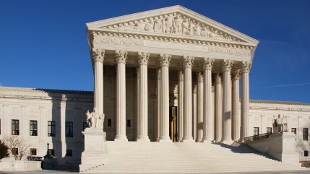 WIKIMEDIA, JAREK TUSZYNSKI The United States Supreme Court yesterday (April 15) heard arguments over the controversial question of whether human genes can be patented. Although no final decision will be reached until later in the year, the tone of proceedings suggested that the justices will find that isolated DNA sequences are natural products and therefore not valid for patents, reported Nature.

The case was first heard in 2009, when the American Civil Liberties Union and the Public Patent Foundation filed a complaint again Salt Lake City-based Myriad Genetics, which holds patents on two genes—BRCA1 and BRCA2—that when mutated cause breast and other cancers, giving Myriad a monopoly on testing for such mutations. The plaintiffs argue that no company should hold the rights to a part of the human body and that sequences of DNA, as a natural product, are not eligible for patenting,

The assertion was barely...

“I would be very surprised if the Supreme Court says isolated gene sequences would be patent eligible subject matter after today’s argument,” Supreme Court blogger Tom Goldstein told Nature. Indeed, many of the questions asked by the justices centered on what effect invalidating gene patents would have on the biotech industry, suggesting the justices were more concerned with exploring the impact of ruling against gene patenting, rather than the validity of the plaintiff’s argument.

Myriad and other advocates of gene patenting claim that ruling against the practice would undermine billions of dollars of investment from biotech companies in genetic tests, drugs, and DNA-based vaccines. “It would chill a wide range of important activities that benefit society,” the Biotechnology Industry Organization said in a friend-of-the-court brief, according to The New York Times. Opponents counter that patents on individual genes actually impede medical progress and obstruct the development of new tests that look at multiple genes.