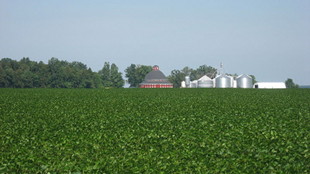 WIKIMEDIA, NYTTENDThe Supreme Court ruled on Monday (May 13) on the case Bowman versus Monsanto that the agricultural biotechnology company retained its patent rights over soybeans descended from the company’s seeds and planted by Indiana farmer Vernon Hugh Bowman. The decision was a limited one, meaning that the justices are confining their ruling to this particular case rather than making any sweeping statements.

Monsanto makes a type of patented transgenic soybean that is resistant to the herbicide glyphosate, or Roundup. Bowman bought Roundup-resistant soybean seeds from Monsanto for his main crop each year. But when it came to planting his riskier second crop of the season, he elected to use unlabelled seeds purchased at a grain elevator, which he could have presumed to include Roundup-resistant seeds from Monsanto. He then treated the crops with Roundup, effectively selecting for Monsanto seeds.

The concept behind Bowman’s defense was “patent exhaustion,” the idea that anyone who purchases an individual patented item has the right to resell it. But Justice Elena Kagan, writing for the whole Supreme Court, argued that patent exhaustion does not extend to making copies of the patented item, which Bowman was effectively doing by using multiple generations of the crops. “Patent exhaustion does not permit a farmer to reproduce patented seeds through planting and harvesting without the patent holder’s permission,” the court’s decision read.

Bowman’s defense also argued that the soybeans, as self-replicating organisms, copied themselves. But Kagan wrote that “it was Bowman, and not the bean, who controlled the reproduction (unto the eighth generation) of Monsanto’s patented invention.”

However, Kagan wrote that the courts rulings did not necessarily apply to other specific cases. For instance, the court had not yet decided how the ruling might change if it applied to a patented organism that truly had replicated “outside the purchaser’s control.”

Hat tips to ScienceInsider, Nature, and The New York Times.

Correction (May 16): This story has been updated from its original version to reflect that glyphosate is an herbicide, not a pesticide. The Scientist regrets the error.