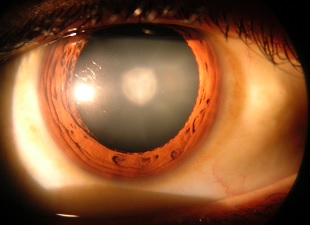 WIKIMEDIA, RAKESH AHUJACataracts, a clouding of lenses leading to vision defects, cause more than half of the world’s cases of blindness, but current treatments carry complications and often create the need for corrective lenses post-surgery. Now a team of researchers from China and the U.S. has developed a technique to remove clouded lenses without removing endogenous stem cells, which then go on to regrow functional lenses and restore vision in human patients. The findings were published yesterday (March 9) in Nature.

“An ultimate goal of stem cell research is to turn on the regenerative potential of one’s own stem cells for tissue and organ repair and disease therapy,” study coauthor Kang Zhang of the University of California, San Diego, School of Medicine said in a statement. “We believe that our new approach will result in a paradigm shift in cataract surgery and may offer patients a safer...

Current treatment involves removal of the cataractous lens and implantation of an artificial replacement. In this procedure, lens epithelial stem cells (LECs) are also removed, preventing lens regrowth post-surgery. But the operation is associated with complications such as lens dislocation or calcification, and its use on young children has been controversial because of possible links to deviated and lazy eye syndromes.

For the new approach—established in vitro, tested in rabbits and primates, and, finally, performed in a group of 12 human infants born with cataracts—the researchers devised a minimally invasive technique to remove lenses while preserving endogenous LECs. Left in place, the team showed, these LECs could regenerate functional lenses. What’s more, compared to a control group of 25 children who received conventional treatment, test group children showed a lower incidence of post-surgery inflammation and lens clouding eight months after the procedure.

Stem cell researcher Dusko Ilic of King’s College London told The Guardian that the study represented “one of the finest achievements in the field of regenerative medicine.”

Ali Djalilian of the Illinois Eye and Ear Infirmary was more cautionary. Although the results are “interesting and worth studying,” he told STAT News, the eight month follow-up time is insufficient to demonstrate the procedure’s long-term safety and efficacy. However, he added, “the fact that they didn’t find serious complications over eight months is remarkable. I was pleasantly surprised.”