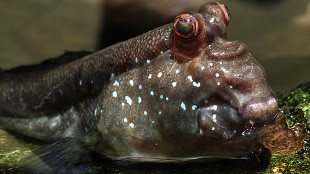 Amphibious fish known as mudskippers spit water at their prey to aid in grabbing and gulping down food, according to a study published this week (March 18) in the Proceedings of the Royal Society B. The technique, which bridges the underwater suction feeding of fish and the tongue-based swallowing of terrestrial animals, could explain how four-legged creatures evolved to eat on land.

Researchers from the University of Antwerp in Belgium filmed Atlantic mudskippers (Periophthalmus barbarous) eating pieces of brown shrimp on a Plexiglass plate. By reducing the speed of their X-ray and regular video 50-fold, the scientists were able to analyze the motions involved in the animals’ half-second-long eating process. First, the mudskippers spit water out of their mouths, covering the food. The fish then engulfed the droplet with their mouths and sucked up the food and water, driving the morsel to the back...

From just before the mudskipper spit until after it closed its mouth around the meal, the hyoid bone underneath its jaw was raised high. The hyoid, a U-shaped bone that controls the tongue movements of land animals, behaves in a similar way when newts feed, but fish without tongues instead drop the hyoid to allow more water to rush in during underwater suction feeding.

The mudskippers’ “water tongue” could help to explain how the terrestrial tetrapods that evolved from fish 400 million to 350 million years ago developed tongues to make it easier to eat on land, the authors suggested in their paper. “This could be an in-between, from which a fleshy tongue could have evolved,” Michel told New Scientist.