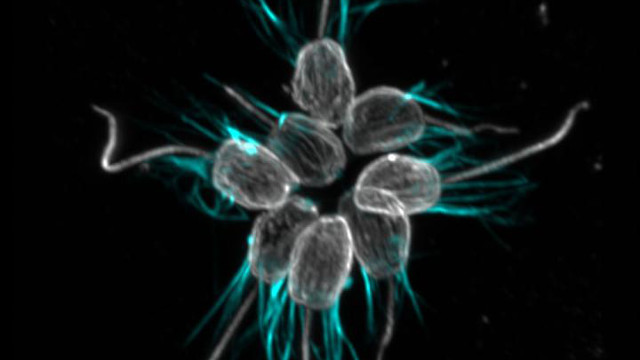 A chemical released by the bacterium Vibrio fischeri sends this protozoan, Salpinogoeca rosetta, into a mating swarm. UNIVERSITY OF CALIFORNIA, BERKELEY; ARIELLE WOZNICASome bacteria are known to influence behaviors, such as feeding, in eukaryotes. According to research presented at the American Society for Cell Biology annual meeting held in San Francisco this week (December 6), one microbe (Vibrio fischeri) can drive mating behavior in the choanoflagellate Salpinogoeca rosetta through the release of an enzyme. Evolutionary biologist Nicole King of the University of California, Berkeley and colleagues have found that exposure to a V. fischeri–produced chonodroitin sulfate lyase leads S. rosetta to aggregate for mating.

In a press release, King said that the finding “raises the possibility that environmental bacteria or bacterial symbionts may influence mating in animals as well.”