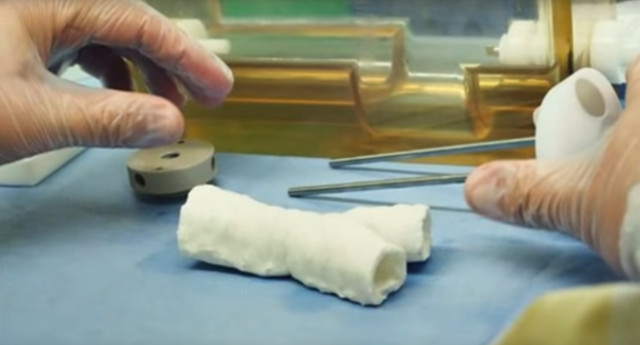 YOUTUBE, ANNEWSThe Expert Group on Scientific Misconduct at Sweden’s Central Ethics Review Board (CEPN) has found evidence of scientific misconduct in all six of Paolo Macchiarini’s synthetic trachea transplantation publications it reviewed. The papers reported on the implantations of three patients with artificial tracheae—all of whom died.

“[T]he transplantations are described successfully in the articles, which is not the fact,” the Expert Group on Scientific Misconduct said in a statement last week (October 27). “The Expert Group also establish[ed] that the information in the articles are misleading and beautifying regarding the patients conditions and furthermore that information has been withhold in this purpose and that this constitutes scientific misconduct. In addition, there is false information of ethical approval, which also constitute[s] scientific misconduct.” The group—composed of University of Uppsala professor of surgery Martin Björck and Detlev Ganten, a professor emeritus of pharmacology and former CEO of the Charité—recommends the retraction of...

The report, released on October 20, further concluded that it was not just Macchiarini who was at fault, but that all coauthors on the six articles in question are also guilty of misconduct. “The responsibility is however different amongst the authors,” according to the statement. “The main responsibility lies on Paolo Macchiarini as the main author and research-leader and others who have had a more prominent role in the research and the authorship. The more detailed responsibility and the future consequences for the respective authors is up to their employers to decide.”

Macchiarini was first found guilty of misconduct in May 2015 following accusations of improper ethical review for the transplant procedures, when an independent investigator commissioned by Macchiarini’s employer, the Karolinska Institute, reviewed the surgeon’s papers and found that the data did not jibe with hospital records. But that finding was rejected by the institute, which cleared Macchiarini of wrongdoing. It wasn’t until the following February that Karolinska administrators decided to reexamine Macchiarini’s case, after a Swedish documentary series aired new details on his work. A month later, the institute terminated his contract, and in December 2016, formally announced that he had been found guilty of misconduct.

In addition to these misconduct investigations, Swedish prosecutors considered pursuing manslaughter charges against Macchiarini, but these were dropped earlier this month. In the new report, the Expert Group “makes no pronouncement on whether their deaths are a consequence of the synthetic trachea implants. However, the material as a whole shows that in no case did the transplant attain functional status, but on the contrary gave rise to serious complications.”

“No patient should be subjected to experiments in Swedish care. Little consolation for those who got hurt,” Helene Hellmark Knutsson, Sweden’s higher education and research minister, tweeted today (translation courtesy of The Local).