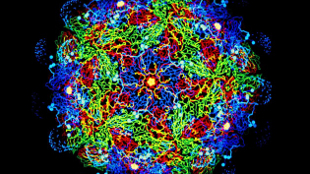 Structure of the foot-and-mouth disease virusTHE PIRBRIGHT INSTITUTEBritish researchers have created an entirely synthetic vaccine for the animal affliction foot-and-mouth disease, according to a study out this week in PLOS Pathogens. The vaccine comprises only a structural mimic of the protein shell of the virus that causes the disease, and thus contains no genetic material, rendering it unable to infect animals. The synthetic capsid has also been engineered for enhanced stability, so it lasts longer outside of cold storage and will therefore be easier to distribute in the poor, hot countries where foot and mouth is endemic.

The vaccine is expected to be available to farmers in 6 to 8 years, reported Nature. But if the method proves successful when scaled for commercial production, it could be used to create safer and more practical synthetic vaccines for human diseases caused by similar viruses, including polio, which...

“This work will have a broad and enduring impact on vaccine development, and the technology should be transferable to other viruses from the same family,” study coauthor Dave Stuart, a structural biologist at the University of Oxford, told BBC News.

The research was carried out in response to an outbreak of foot-and-mouth that devastated farms in the United Kingdom in 2001. Almost 10 million livestock animals had to be put down, and a mass vaccination program followed. But 6 years later, a vaccine made from inactivated virus reverted to its infectious form and caused another outbreak.

Previous attempts to create a synthetic vaccine by making a recombinant version of the virus capsid failed primarily because the scientists were unable to make the complex shell structure strong enough; the synthetic shells simply fell apart too quickly to be useful. This time, however, Stuart and his colleagues were able to tweak the production process to reinforce the weak points and therefore make the empty capsids more stable.

The researchers then used X-ray crystallography to show that their synthetic capsids are almost exact replicas of the real thing, and demonstrated their ability to induce protective immunity in cattle for up to 34 weeks.