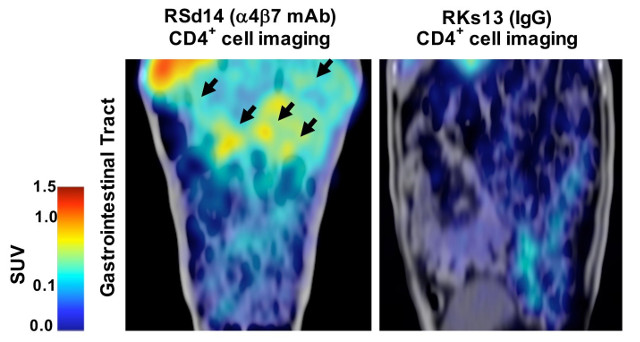 “With standard retroviral drugs, once you withdraw them, the virus comes back. And here is a case where the virus isn’t coming back,” said viral immunologist David Montefiori of Duke University in North Carolina who was not involved in the work.

The antibody binds a molecule on T cells called α4β7, which directs T cells to gut lymphoid tissues “like a zip code on the cells,” explained study coauthor Aftab Ansari, a pathologist at Emory University in Atlanta. Because the gut...

Ansari and colleagues at the National Institute of Allergy and Infectious Diseases (NIAID) previously showed the antibody could prevent vaginal transmission of SIV in 50 percent of infected macaques and minimize viral replication and CD4+ T cell loss in gut tissues.

For the present study, the team administered the antibody and ART to eight macaques with established SIV infections. The researchers then discontinued ART, causing viral replication to spike, and administered antibody infusions for 14 more weeks before halting all treatment. In the following 18 weeks, viral DNA dropped to undetectable levels in blood and gut tissues in animals that received the α4β7 antibody.

“All of the animals have remarkable control of viremia,” said Montefiori.

According to Ansari, after two years with no further treatment, the experimental group animals are still alive and being examined as part of ongoing studies to understand the immunological mechanisms behind the prolonged protection.

A humanized version of the same antibody, manufactured by Takeda Pharmaceuticals, is already approved by the US Food and Drug Administration for the treatment Crohn’s disease and ulcerative colitis. The NIAID has initiated a phase 1 trial to test the drug’s safety in HIV-positive people.