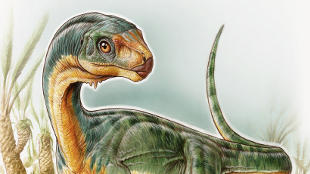 Chilesaurus diegosuareziGABRIEL LIOT. rex’s family was a little bigger than once thought. Scientists have described the fossilized skeletal remains of an herbivorous relative of the fearsome predator that lived 145 million years ago, publishing their results yesterday (April 27) in Nature. Diego Suarez, the seven-year-old son of two geologists, found the first specimens of the new species, dubbed Chilesaurus diegosuarezi, in southern Chile in 2010. Researchers subsequently unearthed more C. diegosuarezi fossils, including four complete skeletons, in the region.

C. diegosuarezi had a small head and short, T. rex-like arms, but possessed spatula-shaped teeth and a thin neck. “This dinosaur was a plant-eater, based on its teeth and jaws,” University of Calgary palaeontologist Darla Zelenitsky, who was not involved with the work, told New Scientist, “but the rest of the skeleton looks like a strange chimera of various meat- and plant-eating dinosaurs.”

C. diegosuarezi may be just the first representative of a long-hidden ecosystem that lies beneath the South American soil, according to lead author Fernando Novas of the Argentinian Museum of Natural Sciences. “What we’ve already discovered is just the tip of the iceberg,” he told National Geographic.  “More specimens will appear, not just of Chilesaurus,” but also of the carnivores that likely preyed upon it.