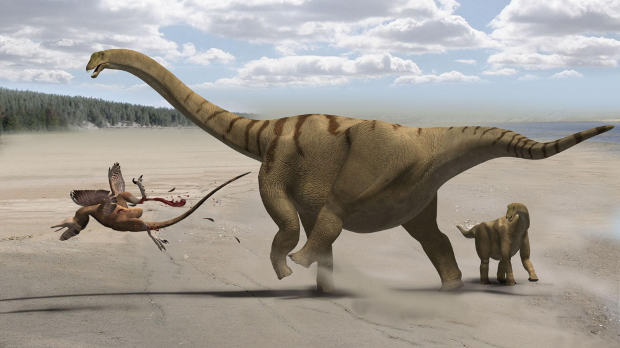 The blood of sauropods, like this Brontomerus, ran much hotter than smaller dinos, such as Utahraptor (left), according to a new analysis of fossil eggs.WIKIMEDIA, FRANCISCO GASCOPaleontologists have debated the body temperature of dinosaurs for decades. Some have suggested that the extinct reptiles were cold-blooded, or exothermic, like their modern kin. But others propose that dinos were warm-blooded, or endothermic, like the birds that evolved from them. A new chemical analysis can get researchers closer than ever to answering the question of body temperature for an individual dinosaur.

Publishing their findings this week (October 13) in Nature Communications, an international team used a technique that considers the structure of isotope clusters in fossilized eggshells to estimate the average body temperatures of the dinosaurs that laid them. “This is just the beginning, and the first application of this technique,” study coauthor Robert Eagle of the University of...

Eagle and his colleagues used a mass spectrometer to measure the clustering of carbon-13 and oxygen-18 in modern eggs from birds and reptiles and fossilized eggs from several species of dinosaurs. The isotopes cluster more at cold temperatures and less at warmer temperatures. The team found that large sauropods were likely warm-blooded, with body temperatures pushing 100° F, while smaller theropods, such as oviraptors, were below 90° F. “The temperatures we measured suggest that at least some dinosaurs were not fully endotherms (warm-blooded) like modern birds,” Eagle said in a statement. “They may have been intermediate—somewhere between modern alligators and crocodiles and modern birds.”

The technique will now likely go through further validation studies to ensure that it captures a realistic representation of the body temperatures of ovulating animals.