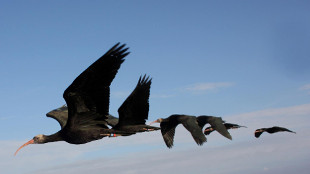 The critically endangered northern bald ibis (Geronticus eremita) frequently swaps out the leading bird in its migratory V formation, giving each leader a rest and evenly distributing the aerodynamic advantages of the flying arrangement, according to a study published this week (February 2) in PNAS.

A team of researchers from the UK, Germany, and Austria trained 14 captive birds to migrate from Austria to Italy while fitted with high precision GPS data loggers to record their relative position in the flock during the trip. The scientists found that the birds formed temporary pairs that took turns at the tip of the V over 60 percent of the total trip time. Each bird spent roughly the same amount of time leading as it did following. As a result of the constantly shifting flying formations, each bird spent only about a third of its...

The ibis group flight strategy appears to be a rare example of reciprocal altruism, since the pairs did not depend on whether birds were related. The lead bird switched with the bird behind it sometimes as frequently as on the order of seconds, which might aid in evenly distributing the positions of leader and follower. “The immediacy of reciprocation reduces opportunity for cheating,” study coauthor Bernhard Voelkl of the University of Oxford told New Scientist.

Thirty percent of young ibises don’t survive their first migration, so “by reducing the amount of energy they use, they can really increase their [chance of] survival,” Voelkl told the BBC. He added that believes other birds may be using similar strategies.