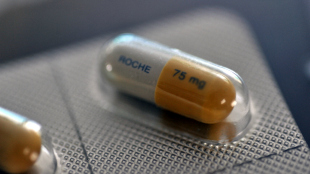 WIKIMEDIA, ANDREW WALESIn recent years, independent researchers have called into question governments’ big purchases of the antiviral drug Tamiflu, given that some analyses have not found considerable benefit from taking the medication. A new study of the available data, published in The Lancet yesterday (January 29), found Tamiflu to be somewhat more effective in reducing hospitalizations than earlier reports, although side effects remain.

In the latest study, led by Arnold Monto of the University of Michigan School of Public Health, patients with influenza who took Tamiflu had a reduced risk of needing antibiotics or being admitted to the hospital, but also had a higher risk of nausea and vomiting. “A study like this can’t on its own say whether it is worthwhile to trade off the reduction in the length of symptoms against the risk of nausea and vomiting,” Kevin Conway, a statistician at the Open University, told The...

Peter Doshi, an epidemiologist at the University of Maryland School of Pharmacy who participated in previous reviews of Tamiflu—and who advocated for the release of more data to be made available for independent reviewers—told ScienceInsider: “There are no new data presented here on complications or hospitalizations that we did not already know of.” Doshi said the difference in conclusions on Tamiflu’s benefits comes from how the data were interpreted—for instance, whether pneumonia diagnoses were consistent. He also told ScienceInsider that Roche, which makes Tamiflu, helped fund this latest study, indirectly.

Peter Openshaw, the director of the Centre for Respiratory Infection at Imperial College London, told The Daily Mail that “as a full review of the published and unpublished data, it leaves the conclusion unaltered that oseltamivir [Tamiflu] reduces symptom duration by about a day while causing nausea and vomiting in a minority of recipients. Oseltamivir is not a perfect drug but does what you might expect of an antiviral given relatively late in the course of an acute infection and after the illness has already become established.”