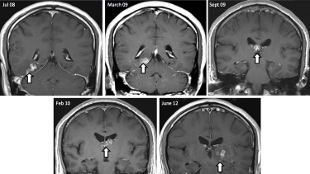 Worm in Brain MRI images show the movement of a tapeworm as it lived for four years inside a man's brain.IMAGE COURTESY OF NAGUI ANTOUN/ADDENBROOKE HOSPITAL NHSWhen a 50-year-old man went to a hospital in the United Kingdom complaining of headaches, seizures, altered sense of smell, and memory flashbacks, doctors performed a battery of tests. Tuberculosis? Negative. Syphilis? Negative. Lyme disease? No. HIV? Also negative. His physicians saw an abnormality in his brain using MRI, but a biopsy found no tumor. It would be four years before doctors found out the reason for the man’s symptoms: a tapeworm. Researchers who studied the worm—and sequenced its genome—published their results last week (November 21) in Genome Biology.

Over that four-year span, doctors performed MRIs and tracked the movement of the worm, which is endemic to Asia, around the right and left hemispheres of the man’s brain. And researchers sequenced...

The researchers also learned that the worm was resistant to enzimidazole, a conventional tapeworm treatment. But the man, who is of Chinese ancestry but has lived in the U.K. for two decades and regularly visits China, reported a complete abatement of his symptoms after the worm was extracted.