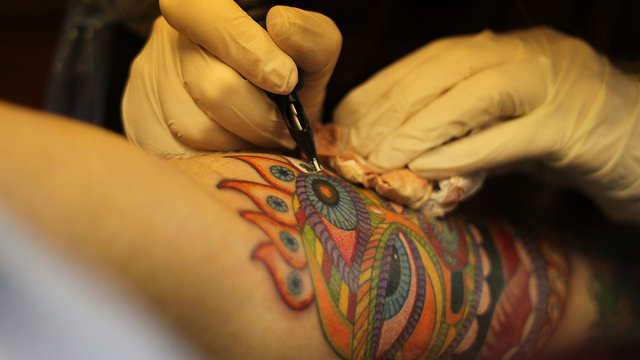 FLICKR, KELVYN SKEETattoo inks consist of organic pigments as well as preservatives and contaminants. According to a study published today (September 12) in Scientific Reports, at least one of these components can travel to the lymph nodes in the form of nanoparticles, posing potential risks to tattooed individuals.

“We already knew that pigments from tattoos would travel to the lymph nodes because of visual evidence: the lymph nodes become tinted with the colour of the tattoo. It is the response of the body to clean the site,” study coauthor Bernhard Hesse, a visiting scientist at the European Synchrotron Radiation Facility (ESRF) in Grenoble, France, says in a press release. “What we didn’t know is that they do it in a nano form, which implies that they may not have the same behaviour as the particles at a micro level. And that is the problem: we don’t know...

The particles the team studied were titanium dioxide (TiO2), a white pigment that is commonly used to lighten various pigments in tattoo ink. Using two of ESRF’s beamlines—machines that apply X-rays to sample a material—the researchers observed TiO2 in the tattooed skin and the lymph nodes taken from four human corpses.

They found a range of particle sizes in the skin—up to several micrometers in diameter—but only nano-size particles in the lymph nodes. The results indicate that the particles not only make it to the lymph system but stay there for long periods of time, which may cause lymph node enlargement. The researchers also found evidence that these nanoparticles can induce structural changes in nearby biomolecules, perhaps leading to inflammation. However, the authors noted in their paper that “most tattooed individuals including the donors analyzed here do not suffer from chronic inflammation.”

Still, the presence of such nanoparticles raises questions about the potential health consequences of tattoos, the researchers argue. “When someone wants to get a tattoo, they are often very careful in choosing a parlour where they use sterile needles that haven’t been used previously,” coauthor Hiram Castillo of ESRF says in the release. “No one checks the chemical composition of the colours, but our study shows that maybe they should.”