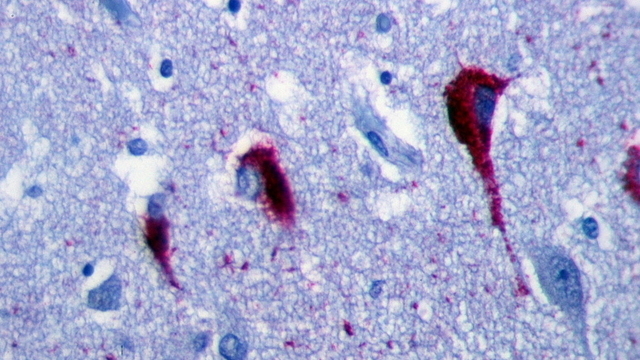 Tau protein tangles in the hippocampus of a person with Alzheimer-related pathologyWIKIMEDIA, PATHO

People with Alzheimer’s have a higher production rate of tau proteins than healthy individuals, according to a study published today (March 21) in Neuron.

While researchers have long known that tau levels are elevated in the brains and cerebrospinal fluid of Alzheimer’s patients, “until this study, we didn’t know if tau production was increased or if clearance was decreased,” coauthor Chihiro Sato, a researcher in neurologist Randall Bateman’s lab at Washington University School of Medicine, says in a statement. “Our results showing that tau production is increased suggest that we might want to target tau production therapeutically.”

See “Probing the Role of Tau Protein in Disease”

Sato, Bateman, and their colleagues measured the turnover rate of tau in the cerebrospinal fluid of people with Alzheimer’s and healthy controls. When they compared the...

The researchers also examined tau production in neurons made from induced pluripotent stem cells and found that forms of the protein that were prone to folding errors also have higher turnover rates than others.

“This study changes our way of thinking about tau in the context of neurodegenerative diseases,” Bateman says in the statement. “We expect these findings will help us to distinguish between Alzheimer’s and other types of tauopathies in future.”