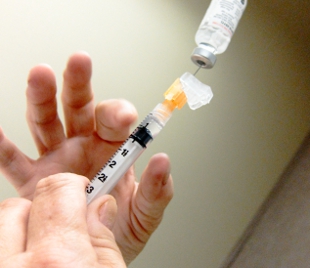 FLICKR, DANIEL PAQUETPatients with early signs of multiple sclerosis (MS) may benefit from the bacille Calmette-Guerin (BCG) vaccine for tuberculosis (TB), according to a study published last week (December 4) in Neurology.

The vaccine may prove to be “safe, inexpensive, and handy” in the treatment of MS, suggest the authors, led by Giovanni Ristori of the Center for Experimental Neurological Therapies at Sant'Andrea Hospital in Rome.

The trial involved 82 people whose MRI scans were suggestive of MS and who had experienced numbness or vision or balance problems—a condition called clinically isolated syndrome that, about half the time, leads to full-blown MS within two years. Six months later, those who received the BCG vaccine had fewer brain lesions than did those given placebo. Moreover, after five years of being treated with MS drugs such as interferon beta-1a (Avonex), 58 percent of vaccinated patients experienced no further MS episodes,...

“The interesting thing was that the single injection affected the course of the recipients for up to five years after they received it,” Dennis Bourdette, the chairman of neurology at Oregon Health & Science University who coauthored an accompanying Neurology editorial, told Bloomberg.

The BCG is also being tested for in patients with Type 1 diabetes, according to The Washington Post.