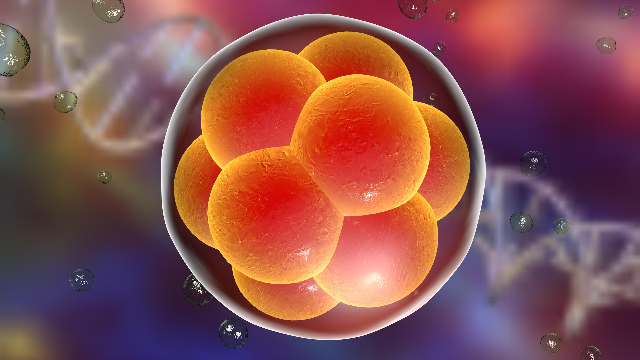 ISTOCK, DR_MICROBEA team of Chinese researchers who were the first to report having applied CRISPR to human embryos have done it again—this time upgrading their technique to base-editing, a method of genome editing that corrects point mutations with higher efficiency than traditional CRISPR-Cas9 techniques. The scientists corrected a single nucleotide error responsible for β thalassemia, a potentially life-threatening blood disorder, according to a study published last week (September 23) in Protein and Cell.

Although the resulting embryos were mosaic—that is, they contained both corrected and uncorrected cells—the technique has the potential for higher precision than previous approaches.

“The paper itself represents a significant technical advance,” Darren Griffin, a geneticist at the University of Kent in the U.K., tells The Guardian. “Rather than using the classic Crispr technology previously reported, the current ‘base editor’ technology is an adaptation that chemically alters...

Unlike older technologies, base-editing does not cleave the DNA when it makes an edit—a feature associated with fewer harmful side effects. To test the approach in humans, the Sun Yat-sen University researchers created cloned embryos using tissue from a patient with β thalassemia, which affects around 1 in 100,000 people worldwide, and has been the target of previous CRISPR-based attempts to eradicate disease-causing mutations.

The team then scanned the DNA in these embryos for the error—a G where there should have been an A—and converted it back using base-editing. Although the researchers acknowledge in their paper that further research is needed before the technique could be used therapeutically in humans, study coauthor Junjiu Huang tells BBC News that “we are the first to demonstrate the feasibility of curing genetic disease in human embryos by base editor system.”

The study’s publication comes just weeks after a US-Korean team reported using CRISPR-Cas9 to eradicate a defective mutation associated with a cardiac disease. That project was hailed as the first study to edit viable human embryos, but was soon met with criticism from other researchers who called the authors’ interpretation of the data into question.