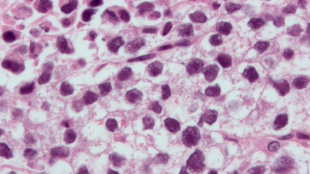 Testicular cells showing characteristics of seminoma, or testicular cancerWIKIMEDIA, NEPHRONEvolution may have favored a particular genetic change as humans migrated out of Africa that led to the prevalence of testicular cancer in white men compared to black men, according to researchers in the U.K. Gareth Bond, a molecular biologist at the Ludwig Institute for Cancer Research in Oxford, and colleagues found that a single nucleotide polymorphism (SNP) in a protein acted upon by the p53 gene, mutations in which cause a variety of cancers, can lead to increased melanocyte production when UV light damages cells, thereby protecting skin from further sun damage. But the same mutation also leads to the uncontrolled proliferation of other cells in the body. They reported their findings in Cell on Thursday (October 10).

The suspect protein, called KIT ligand (KITLG), is mutated in 80 percent of Caucasian Europeans but only 24 percent of...

When the team exposed p53 knockout mice to UV radiation, the rodents could not produce any KITLG. But in wild-type mice, KITLG production doubled upon UV exposure, triggering melanocyte production. This could mean that the deleterious SNP in KITLG was allowed to persist in populations moving out of Africa because it conferred an advantage by producing more melanocytes and protecting their paler skin from sun damage. An unintended consequence, however, could have been the propensity for unchecked cell growth elsewhere in the body—e.g., in the testicles.

“As early humans migrated northward out of Africa, losing skin pigmentation allowed them to retain more vitamin D in the dimly lit terrain,” Douglas Bell, a molecular biologist at the National Institute of Environmental Health Sciences, told ScienceNOW. “But those who were better able to repair UV damage had an advantage.”

The paper is the first to link p53, KITLG, UV radiation, and increased cell production in a cohesive process.