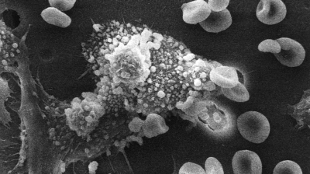 WIKIMEDIA, SUSAN ARNOLDThe District Attorney (DA) of Travis County, Texas, is investigating the Cancer Prevention and Research Institute of Texas (CPRIT) in Austin for possible criminal activity surrounding a recent round of grants it dished out, Nature reported. Concerns seem to revolve around awards given to companies owned by Dallas businessman David Shanahan, who was a major campaign contributor to both Texas governor Rick Perry and Lieutenant Governor David Dewhurst, “who control many of the levers when state dollars are handed out for economic development programs,” The Dallas Morning News reported. Though Shanahan claimed that his campaign contributions—$20,000 to Dewhurst and $15,000 to Perry since 2007—had “no impact of which I am aware” on the public dollars his companies received, his awards from CPRIT came despite receiving low scores from grant reviewers there, raising questions about the politics of CPRIT’s funding mechanism.

Last week (December 7), the DA wrote two letters to CPRIT to notify the institution of the investigation, warning that destroying any documents is a criminal offense. “We will be in touch in the near future with a subpoena or other legal demand for documents and/or electronic mail,” the letters read.

The DA’s office is also examining an $11 million CPRIT grant awarded to Dallas-based Peloton Therapeutics in 2010, Gregg Cox, director of the public integrity unit in the DA’s office, told Nature. The grant was apparently never subjected to the appropriate peer review channels before being submitted to the oversight committee for approval—a fact that became apparent during an audit this past September—and according to a letter by Jay Dyer, the Attorney General’s appointed representative to the CPRIT governing board, CPRIT Executive Director Bill Gimson took an additional 2 months to alert CPRIT’s governing board to the matter.

Gimson submitted his resignation on Monday (December 10), stating he has “been placed in a situation where I feel I can [no] longer be effective.”