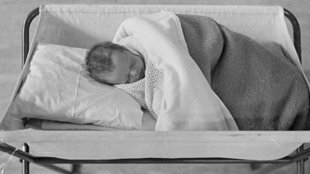 WIKIMEDIA, IMPERIAL WAR MUSEUMS COLLECTIONAnyone who has snuggled a clean, new baby probably also noticed the child’s distinctive, pleasing smell. In a study published this month (September 5) in Frontiers in Psychology, researchers used functional magnetic resonance imaging (fMRI) to show that the brains of new mothers are more responsive to this scent than the brains of women who are not mothers.

Scientists from Germany, Canada, Sweden, and the U.S. recruited both women who had never had a baby and women who had recently become mothers (three to six weeks prior to enrollment). They also collected cotton undershirts worn by newborns unfamiliar to the women during the babies’ stay at a Dresden nursery . The researchers passed clean air over the undershirts and delivered that air to the adult participants’ nostrils, studying their responses via fMRI. All of the women ranked the odors’ familiarity, pleasantness, and intensity comparably,...

“The olfactory—thus non-verbal and non-visual—chemical signals for communication between mother and child are intense,” said author Johannes Frasnelli of the University of Montreal in a statement. Frasnelli explained that the brain areas activated in both groups of women are related to reward and motivation, and suggested that the higher level of activation in these brain regions among the mothers may be the result of an adaptation that ensures the mother will take good care of her baby.

“For those first few months babies are mostly just needing to be cared for and we don’t get much positive feedback from them,” maternal health psychologist Diane Sanford told NBC’s Today. “So the fact that the pleasure centers are activated makes it more rewarding at a time when parenthood is very intensive and depleting,” she added.