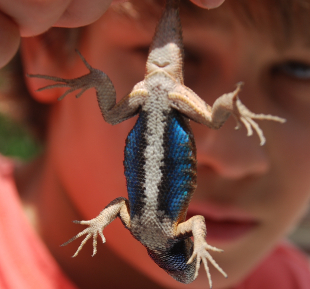 The bright underside of a male eastern fence lizardWIKIMEDIA, JAREK TUSZYNSKIResearchers have documented instances in which male animals take on female or subordinate traits as a sneaky reproductive strategy. But in some populations of one reptile species, the eastern fence lizard (Sceloporus undulatus), as many as 70 percent of females are male mimics, donning a blue patch of scales on their chins that pales in comparison to the bright markings seen on the heads and bellies of males. Now, researchers have suggested that, although such masculinized females don’t secure as many mates as their more feminine counterparts, “bearded ladies” may have certain evolutionary benefits. Although males seem to mate with them less frequently, bearded females can run faster and have offspring that survive better than non-male-mimicking females. Penn State biologist Tracy Langkilde and colleagues reported the findings at the annual meeting of the Society for...

“It’s a very eloquent study, important to our understanding of why males and females [of all species] are different,” Erica Westerman, a University of Chicago evolutionary biologist who was not involved with the work, told Science.

Langkilde and colleagues showed in a 2013 study that male eastern fence lizards preferred to mate with females without blue throat patches and that bearded ladies reproduced later in the mating season than did unmarked females. But still large numbers of females with the male trait persisted in the population, causing the researcher to wonder why. “We plan to follow this up by examining potential benefits associated with these male-typical ornaments in females,” Langkilde told The Scientist at the time.

Pursuing a hunch that heightened testosterone levels had something to with the bearded ladies appearances, the team gave pregnant, non-male-mimicking females shots of testosterone and found that the treated females had lower hatching success of eggs, and produced smaller offspring with poorer survival. But bearded ladies also ran faster than unadorned females, and the offspring of male-mimicking mothers survived better when brought into the lab than did the offspring of non-bearded females. This, Langkilde told Science, may mean that there are hidden fitness benefits to adopting a masculine look. But that the trait is so prevalent in some populations of the lizard is still perplexing, and insights into such phenomena may uncover broader evolutionary or physiological principles.

“Attempting to understand evolutionary trade-offs is of interest to a broad swath of biologists,” Peter Zani, an integrative biologist at the University of Wisconsin, told Science.