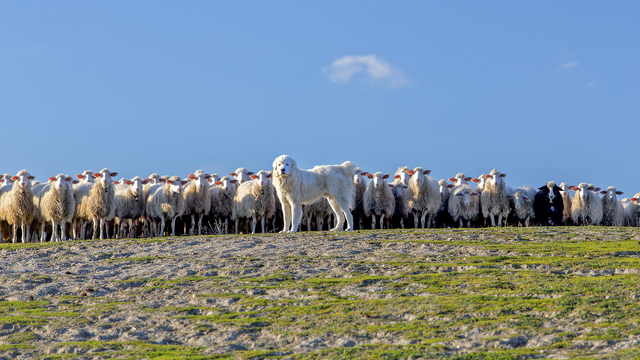 In a study involving nearly 120 guard dogs from Portugal, Bulgaria, and Turkey, federal scientists at the US Department of Agriculture (USDA) found that the imported dogs were better at protecting sheep from coyotes and wolves than breeds traditionally used in the U.S., the Associated Press reported last week (March 10).

“When we were first looking at doing this, a lot of people wanted to know: What dog do I use in dealing with wolves and grizzly bears?” Julie Young, a Utah-based research biologist with the USDA’s National Wildlife Research Center, tells the Associated Press.

Wolf populations, which were placed on the Endangered Species List after being decimated by hunting in the early 20th century, were reintroduced in the American West in the 1990s. Since their return, however, these animals have been harming the local guard dogs—Maremma Sheepdogs, Akbash, and Great Pyrenees. According to USDA’s Wildlife...

To see whether imported dogs would be better at fending off predators, Young and her colleagues zeroed in on areas where dogs had been bred to protect livestock from wolves and brown bears. They selected three breeds for the study: Cao de Gado Transmontanos, originally from the mountains of Portugal; Karakachans, bred by nomadic shepherds in Bulgaria; and Kangals, developed to guard livestock in Turkey. The dogs were gathered as puppies and sent to the U.S., where they were used to guard 65 herds of sheep in Idaho, Montana, Wyoming, Washington, and Oregon.

The researchers are still analyzing data they gathered with remote cameras and GPS collars over the four-year study. But Young tells the Associated Press that the imported dogs were successful in deterring wolves from attacking sheep and were better than traditional guard dogs at keeping coyotes at bay. She adds that each breed has different talents—Karakachans were more vigilant than the others, while Kangals had a greater tendency to investigate—and that using a mix of guard dog breeds might be the best strategy for protecting livestock.