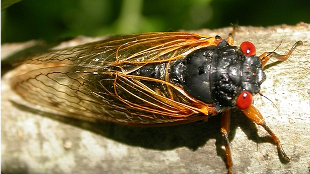 A Brood II cicada (Magicicada septendecim)WIKIMEDIA, MARTIN HAUSERBillions of red-eyed, black-bodied cicadas will swarm the eastern United States in the coming weeks as rising soil temperatures prompt the insects to emerge from the Earth, where they have been developing for the last 17 years.

Known as Brood II cicadas (Magicicada septendecim), the inch-long flying insects will form dense clouds, clinging to walls and trees and any other surface they come across, looking to procreate. The males will emerge first, as soon as the soil temperature reaches 64°F. Then come the females. The first of this year’s Brood II emerged in North Carolina in April, according to CicadaMania.

Once the males have matured into adult winged cicadas, they will thrash out their noisy acoustic signals to attract mates. “When there’s a lot of them together, it’s like this hovering noise,” Chris Simon, a biologist...

One theory for this unusual life cycle is that it makes the cicadas less of a habitual target for predators. Swarming may also help, because their vast numbers can overwhelm most insect-eating animals. Nevertheless, some predators, including raccoons, will make a meal of them.

Humans, too, can eat the cicadas.  The recently emerged “tenerils” make for the tastiest snack, according to Discovery News, as their shells are still soft, meaning they can be cooked up like tiny shrimp.