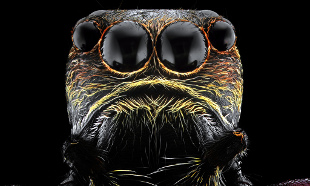 Color plays a significant role in the courtship rituals of some jumping spiders, like Habronattus pyrrithrix. Male jumping spiders can be covered in patterns that include bright reds and oranges. Despite this, scientists have only identified photoreceptors for green and ultraviolet (UV) light in the eyes of H. pyrrithrix. In a study published in Current Biology this week (May 18), researchers at the University of Pittsburgh reported on their discovery of a light-filtering strategy H. pyrrithrix uses to broaden its color perception.

“It’s a sweet way of solving the problem,” Gil Menda, a neuroethologist at Cornell University in Ithaca, New York, who was not involved in the study, told National Geographic.

The Pittsburgh team sectioned H. pyrrithrix retinas and shined light through them to determine which colors the arachnid can detect. In addition to the green and UV photoreceptors, the team found a red pigment...

Because H. pyrrithrix can perceive UV and green wavelengths in addition to the reds and oranges, study coauthor Nathan Morehouse, an evolutionary biologist at the University of Pittsburgh told National Geographic that “in principle, they can see an even broader spectrum of colors than we can.”